The word “gi” is the Japanese word for a uniform.  A “karate gi” refers to the uniform worn in the practice and competition of karate.

The karate gi is relatively new. It has only been used since the 1920s. Before the karate gi was implemented, students learning karate would wear something similar to the kimono. It was called a hakama. The difference between the hakama and the kimono is that the hakama has pants. 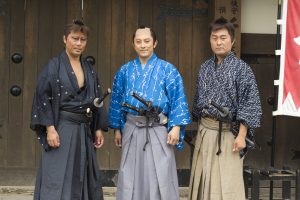 A hakama was used before the karate gi was implemented.

In the 1900s, the social class structure was as strong as ever. When karate was beginning to be taught on the mainland, you had lower-class, middle-class, and upper-class training together in the same room. The upper-class students felt as if they deserved better treatment than their classmates. Gichin Funakoshi, founder of Shotokan karate sensed this disruption, and he formulated an idea to make things equal in the dojo.

Funakoshi’s idea was to implement a uniform in order to promote unity in a socially divided dojo.

While the uniform took notes from the judogi, a uniform used in judo, it differed due to the fact that it also took influence from the previous hakama with being lightweight. The heaviest karate gi is only 14 ounces, while judogi can weigh up to 32 ounces.

An 8-ounce karate gi is typically used by students since they are inexpensive and easy for dojo owners to keep stocked. Experienced practitioners will also use this karate gi in the summer as something light and airy to wear. This material will feel closest to natural cotton clothing. However, as with all karate gi, it will feel clunky when first using it.

The 10-ounce karate gi is for people who feel that need a little more response from their gi, but they also do not want to be stifled by it. As students gain experience, they are expected to generate snap and pop from their gi. This came into being due to the fact that instructors use the snap as a measure of time, or martial art focus.

The 12-ounce gi is used for people who absolutely need a response. Typically, those who participate in tournaments use this in order to get the desired snap they need. When pressed and ironed, this type of karate gi looks proper and sharp at any official events or gathering.

The 14-ounce is the heaviest uniform you can get in general. It is the most responsive uniform of all. However, it can also suffer from a cardboard effect if the material is not washed properly or if the material is not of high quality. Good heavyweight gi is often 100% cotton for this reason. They are great for official events due to the fact that they produce an excellent snap when performing techniques.

The different styles of karate gi only differ through the lengths of the sleeves, legs, and the skirt of the jacket. These cuts are known as Japanese, European and Kata.

The Japanese cut has short sleeves and trousers for less restriction while moving. This cut has a long lapel to prevent it from riding up over the obi.

The European cut has longer sleeves and trousers, while the lapel is shorter.

The Kata cut is the rarest of them all. It has the shortest sleeves of all of the cuts, and it is typically chosen for aesthetic appeal.

There are two main colors: white and black.

White is the most prominent color, and it is accepted in almost every dojo. They are typically given to students who are new to learning karate. If the student quits at one school, their gi will most likely be accepted at their next school. 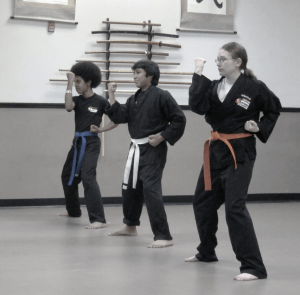 Black is also used since it also has traditional roots. Traditionally, a black gi was worn if you have made the progression to higher levels and have mastered all your techniques.

Today, black gis are also considered for those who are intermediate ranks. However, they are not allowed everywhere. This practice differs from dojo to dojo.

Anything beyond those basic colors is considered modern and varies from dojo to dojo. It is important that you ask the dojo you wish to join what rules and regulations they abide by for their karate gi.