Karate has a long-standing history. Karate belts or obi are used to grade a student based on their ranking within the classroom. With that in mind, the Karate belt system is relatively new.

The Karate belt system began in the early 1900s. The belt system was put into place to maintain the values that karate was founded on as well as to help maintain the standardization of requirements needed. The belts represent the integrity of a student who is steadily improving in their pursuit of karate.

The history of karate belts is brief due to it being a rather modern construct that has been placed upon an old martial art.

Originally, some Japanese martial arts used a three-tier system that involved certificates as rewards. Shodan was the word used for a beginner. The word chudan marked the status of middle rank. While the third and final rank,  jodan, allowed the student to enter into the secret traditions of his school.

While several used this three-step system, there was another early system in use. This system used a series of licenses called menkyo.

These licenses were earned by order of time within the martial arts. Kirikami was an honor received for staying within the training for one to three years. It was to show that the student had been accepted into the school. After three to five years, the student was given the mokuroku, or a catalog of the school’s techniques. Two to ten years after the student received the mokuroku, they were licensed to teach others in the art. The ultimate title was menkyo kaiden, which was given to someone who had mastered every aspect of the school’s teachings.

It wasn’t until the 1920s that the karate belts were given a color system. The outfit itself was adopted from judo. However, changes were made to ensure more mobility. This outfit consisted of the modern uniform (karate gi) and a thin belt (obi). Originally, the karate belts’ colors were adopted from the gaming system in Go. Because of that, this color system only contained three white, three brown, and ten black belt grades. In 1935, a judo master named Mikonosuke Kawaishi began incorporating other colors in order to motivate his students towards greater achievements. This quickly caught on to tae kwon do and karate as well. 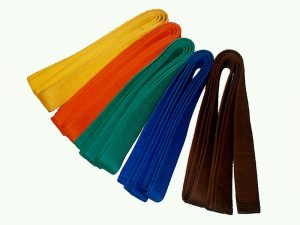 An old tale stated that karate belts’ colors originated from the odd habit of washing all of their training clothes except for the belt itself. Over time, the belt would resemble a filthy black color. However, many know this tale is simply not true.

Another account of history states that the white belt was dyed to a new color. This process of repeated dying dictated the order of the color of the different belts that we see today. The standard karate belt colors are white, yellow, orange, green, blue, purple, brown, red, and black. Here is the meaning behind each different color of belts.

The white belt is used on the first level. It is worn by students who have just started their journey into the world of karate. Therefore, this belt symbolizes the enthusiasm to learn and a perfectly clean slate.

The yellow belt is awarded to students who are demonstrating that they are learning and using karate as they are educated to do so. This karate belt symbolizes the first ray of sunshine that eventually gives way to more light and hope every morning. It represents the hope of a student when they are learning and practicing.

The orange belt is given to students who have further developed their skills. They have opened their mind completely and their skills are developing well. Just as the sun rays continue to grow in strength, the student is also improving their strength. As the light continues to spread across the earth, the student’s knowledge will also expand in karate.

The green belt shows that the initial steps to learning karate have been completed. This karate belt is rewarded to intermediate students, who are refining their skills. With that in mind, the symbolism of this belt depicts the roots and stems of vegetation, spreading out in order to capture even more sunlight. This shows the student is trying to obtain more knowledge in order to achieve their next karate belt.

The blue belt is awarded to students who are further improving themselves. They have learned technical skills and additional knowledge about karate. Symbolically, the plants are beginning to sprout toward the sky. As they continue to soak up the knowledge, they are branching out and differentiating in order to gain a deeper understanding.

The purple belt marks that the student is converting into the advanced stages of learning karate. It represents the dawn. As with the stages of the sky, the student is also starting a new stage. This student is fully committed to the art of karate and acquiring new karate belts in the future.

The brown belt shows a sign of maturity within the student. This karate belt is given to a student whose skills have begun to mature. Therefore, this belt represents that the plant has begun ripening and it will soon be ready for harvest. With this belt, the student is now ready for combat.

The red belt is used to show that the student has gained more detailed knowledge about karate. They are aware of their discipline within the art of karate. Symbolically, the color red represents the heat from the sun. The student has a passion for karate and is able to guide those below their belt in a successful direction.

The black belt is the final color of the karate belts. Students who have gained this belt have a deep understanding of the physical and mental ways of karate. These students are considered experts within karate, and they are able to start passing their knowledge to others. The color black symbolizes darkness. Behind every illuminated object, there is a shadow. This shadow can mark the knowledge the student has gained from mastering karate, or it can show that the student has become a teacher to others by supporting them from behind.