Martial arts in Japan dates back to 1185. It was born 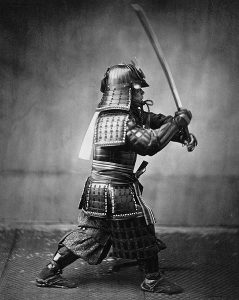 out of the need to prepare for combat and protection. This art form was mainly practiced by the samurai.

This class was made up of highly skilled warriors. The need for them arose in Japan after the Taika Reform.

While some samurai were relatives of the landowner they protected, others were simply hired. They were tasked to defend the riches of their daimyō lords.

With the rise of samurai’s also came the rise of the martial arts. They learned to be proficient in hand-to-hand combat in order to better serve their feudal lords. This combat was collectively known as jujitsu. The objective of jujitsu was to use your opponent’s strength against themselves in combat. This was done through handholds and deft maneuvers to throw the other person off balance.

Jujitsu is thought to be the oldest form of Japanese martial arts. All martial arts that originated in Japan came from this form.

Judo and aikido are thought to be purely Japanese martial arts. They were derived squarely from jujitsu.

Judo was developed in 1882. Judo means “gentle way”. However, it does focus on grappling in order to take an opponent down. It has a wider philosophical application through Confucianism than jujitsu.

The modern aikido was developed in the late 1920s. Although, it derived itself from the martial art of Daitō-ryū Aiki-jūjutsu. The older form originated sometime in 1045 to 1127. It was developed by a samurai who studied anatomy. It was for the purpose of learning techniques for joint-locking and vital-point striking. This is what made it depart from the root form of jujitsu.

Other forms of martial arts that took root in Japan were imported by other countries.

For example, karate came to Japan through the need for combat from the Ryukyu Empire (present-day Okinawa). The people of the Ryukyu Empire chose to employ martial art forms from China in order to combat their tyrannical lord. It wasn’t long before Karate had spread throughout Japan. The specific form that was developed in Okinawa is called Isshin-Ryū.

Most of the martial arts were imported from China, where they were gradually modified by the Japanese.

What led to Japanese martial arts to come to the United States of America?

WWII marked the beginning of martial arts in America. It was shown by Japanese martial arts masters to American citizens.

Many prominent United States officials also helped to introduce it to the general public. A well-known official who practiced martial arts was Theodore Roosevelt. He learned the art of jujitsu.

Because of its prevalence in society, martial arts also made its mark on the American military. In the 1950s, judo became required training for those serving in the Air Force’s Strategic Air Command Division. These service members also took the liberty to spread those teachings on the home front after the war.

From there, Japanese martial arts grew immensely in popularity.

America’s infatuation with Bruce Lee starting in 1959 helped cement martial art’s standing within American society. His action films introduced martial arts to Hollywood. His films propped martial arts to be in the spotlight, encouraging more interest in the art form.

This effect is still on-going even now, Japanese martial arts are still popular in American society.

This can be seen in the sheer amount of martial arts schools available in the United States. While it is hard to pinpoint, it is projected that there are 15,900 schools perfecting the craft of around 3.9 million martial art participants! Many believe it will only continue to grow in the future.