ATA martial arts is the world’s largest organization that is dedicated to teaching martial arts to the entire family. 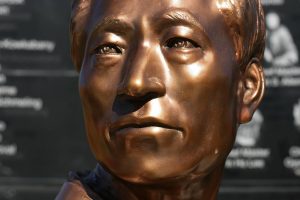 Taken from the base of the statue of Grand Master H. U. Lee, the founder of ATA International. Photographed by Ed Schipul

Eternal Grand Master, Haeng Ung Lee, is the founder of ATA International. He committed himself to improve lives by teaching his values through martial arts.

The motto of ATA martial arts is developed based on his values:

To provide students with the highest quality martial arts curriculum available in a fun and positive learning environment that people of all ages can enjoy.

It is one of the largest martial arts organizations in the world. It teaches more than 300,000 active members about the Songham style of Taekwondo.

This symbolizes “evergreen strength the year round, long life and a symbol of unchanging human loyalty,” as stated in The Way of Traditional Taekwondo. This name and meaning were given to Haeng Ung Lee by his brother, Soon Ho Lee years before ATA was founded.

Within ATA courses, a variety of things are taught. Students learn self-defense, offensive and defensive techniques, sparring, board breaking, and weapons. Students are taught to see the strength and beauty within them. Students can also learn about leadership.

Students can learn leadership skills through the legacy program. This program allows students to work as instructors in junior classes. They can earn the ATA martial arts title of Certified Instructor by doing this.

ATA was formed in 1969. It was originally called the American Taekwondo Association. In the same year, it also held its first-ever Instructor Camp for a week long in Fremont, Nebraska. These instruction camps teach skills that are helpful for training students. Instructors are required to be certified in CPR and Youth Protection as well.

There are 950 locations located all across the world. However, the headquarters of ATA International is in Arkansas. It was moved to this location in 1977.

They hosted their first Grand Nationals tournament in 1978. It was the predecessor for the Songham Taekwondo World Championships. The latter of which is now held annually. This tournament was the first instance of ATA’s involvement on a national scale.

From 1883 to 1990, Haeng Ung Lee introduced the 18 Songham forms to ATA martial arts. This curriculum is fully integrated, with each part of reinforcing the other. It makes for a smooth and easy progression from a simple block to doing jumping kicks years down the road.

After this, in 1990, Haeng Ung Lee receives the title of Grand Master for his accomplishments. He had achieved his 9th black belt. This is a grand honor to receive in the martial arts community. 1990 is also the year that the first Songham Taekwondo World Championships are held. This event is now held every two years. With over 150 countries participating, more than 1,000 athletes come to this event.

On October 5, 2000, the founder passed away due to cancer. Shortly after, he was given the title of Eternal Grand Master. This is due to his love and commitment to the martial arts community. The students of him at ATA International included over 53,000 black belts and 3,000 certified instructors.

Before his passing, Haeng Ung Lee realized that he needed put in place a founder’s council. He wanted to tell them his vision for the future of ATA International.

Due to that, the values of Haeng Ung Lee are kept very much alive in the organization. ATA martial arts is a pioneer of the martial arts industry. This is because of its unique style and high quality of curriculum and instructors.